Exhibition X is not a small country / Daniel Zamarbide 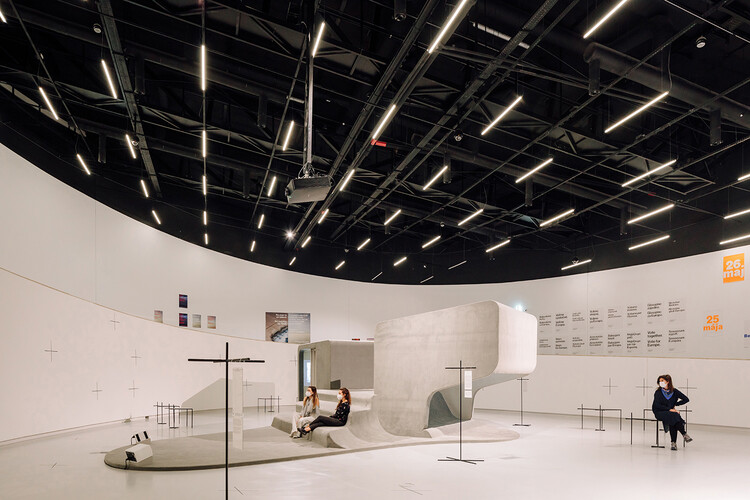 Text description provided by the architects. The scenography of the exhibition follows these lines of thought: Fieldwork: the resurrection of the 1934 map by Henri Galvão, a complex transnational frame of reference. Translation: the very current and diverted subject of borders, peripheries, nations dictating conventions on one side of a line against what could happen on the other. Lines: suggested by a distorted, half-invisible grid, offering potential narratives of referential diversity, blurring the north-south orientations. Geography: an insinuated three-dimensional spatial grid escapes all clear belonging. Choice: “If I had to choose between The Doors and Dostoevsky, then – of course – I would choose Dostoevsky.” But should I choose? (Susan Sontag in Jonathan Cott, The Complete Rolling Stone Interview, Yale University Press, 2013).

The grid has a special power that extends far beyond its graphic presence. In art, it appears as an optical device of visual explorations on perspective, particularly intense at the time of Paolo Uccello. In cartography, Cartesian coordinates have largely occupied the world of maps as a reference system since the 17th century.

The uniqueness of the grid, as Rosalind Krauss expressed in her 1980 October magazine article “Grids”, is its ability to hide and reveal, setting up a seemingly orderly game of appearance and disappearance. What it reveals is what might appear on the grid once it’s laid out. What she masks or conceals is a pre-existing condition that her own arrangement has covered, like an action of erasure on a dominant context.

The discussion on the validity of the grid as a referential system is therefore naturally complex, all the more so in an exhibition dealing with the conditions of post-globalism which placed its central line of thought on a map (Portugal não é um pais pequeno by Henri Galvão from 1934 – Portugal is not a small country), opening the door to cartography as a tool for colonization. The maps presented specific views of the world with its Cartesian grid, and those views were informed by the martial will to conquer parts of the world presented in those same maps.

The design exhibition X IS NOT A SMALL COUNTRY modestly tackles this complex and long history, taking the grid to a three-dimensional level to address contemporary issues of world mapping and its transformation into data-driven realities. And he admits to a certain degree of convoluted confusion in the SEO world. Once the power play of north-south or east-west classifications has been blurred, as the geopolitical state of the world now clearly indicates, what grid system could faithfully order or reorder the geolocation of physical and virtual presences? Is the Cartesian coordinate grid still politically acceptable? Was it ever? Indirectly, the infinite nature of the grid opens up a discussion of borders, boundaries and agendas of domination as well.

The particular oval space of the MAAT offers an interesting framework to accommodate such a hypothesis of post-global presences. For X IS NOT A SMALL COUNTRY, a division has been drawn so that visitors confront them in one way or another with a choice of route. The pieces of design and art approach quite openly this feeling of disaffection following the conventional understanding of national identities. In the exhibition space, they are spread “freely” on one side or the other of a physical and fictional line: a border wall. They appear and disappear in relation to each other, to the architecture of the museum and to the scenography of the exhibition.

The variety of media, physical and virtual, is also organized to give indications on the inability to classify. It is the visitor’s choice to rearrange the north-south-east-west logics and to recompose them in a contemporary condition, a renewed historical fiction.