Nixon Leger is an artist with a rich history. Born in Haiti, Léger discovered a love of art at an early age and was inspired by the world around him. Emigrating to the United States in 2008, Léger studied at the University of Rhode Island, obtaining his second degree. On view through Feb. 24 at URI’s Feinstein Campus in downtown Providence, two floors of exhibition space feature dozens of Léger’s paintings. The show bears witness to Léger’s unique story and boundless imagination. It’s also a celebration of his connection to the URI and the state of the ocean.

During his upbringing in Haiti, Léger became fascinated with the aesthetics of the plantain leaf. He has previously cited the coloring of the leaves, their shape and their organic nature as key inspirations in his artistic creation. For him, this form represents the cycle of life. The changing aesthetics of the plantain leaf and its deeper meaning can be found in his vast body of work. Léger’s paintings, displayed in URI’s two-level gallery space, exemplify his varied interests and dynamic susceptibility to trying new methods of image-making. 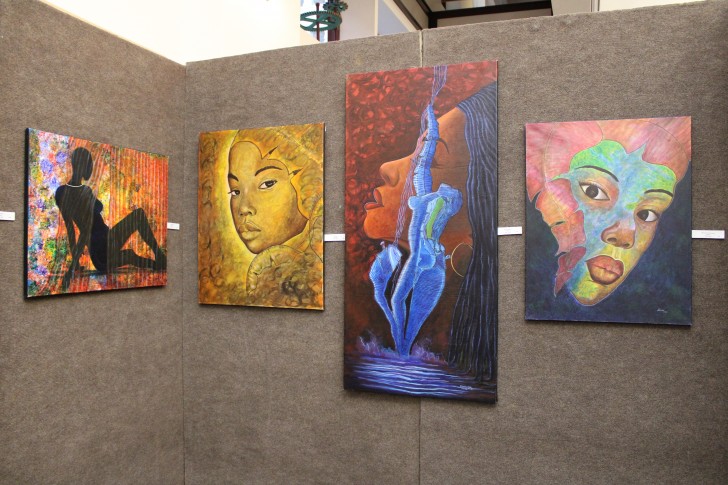 Léger works primarily in acrylic, a fast-drying medium that allows him to layer and build. The exhibited works play with layers, textures and even scale. While many of Leger’s finished paintings are medium in size, a few pieces are surprisingly large. One of these larger-scale works is “Zombified by a Few”, which depicts linear figures superimposed on a subtly toned sky. Léger’s treatment of the earth below the crowd is one of the show’s most interesting. Rich greens paired with deep browns and blacks combine in a layered puzzle of exciting dotted lines.

While Léger’s use of color can be dazzling, some of the most striking works in the retrospective make the most of muted tones. In a smaller work, titled “Nature’s Connection”, Léger uses warm colors and rich surfaces to create a very refined, almost geometric landscape. Palm leaves are highlighted by linear forms, giving both a sense of place and a sense of design in a carefully thought out composition.

The subject matter of Léger’s work is as varied as its scale and style. The figure is a recurring motif, just like nature, and even music. In a painting made in honor of Nina Simone, a figure holding a microphone springs from a collection of instruments including a piano, guitar and drums. Under the music creation tools, a strain of music can be played. The piece alludes to Léger’s interest in the graphic qualities of design while celebrating a well-known musical artist.

The works featured in Léger’s exhibition include pieces executed in a wide range of media. Léger is an artist with an insatiable appetite for experimentation and exploration. While many works include figurative elements, a small series of works under the title “Mutations” presents a foray into pure abstraction. The results of this grouping are amorphous, textured and surreal. In some ways they seem to have been crafted by a different hand from the rest of Leger’s work, but they exude the same creative passions. 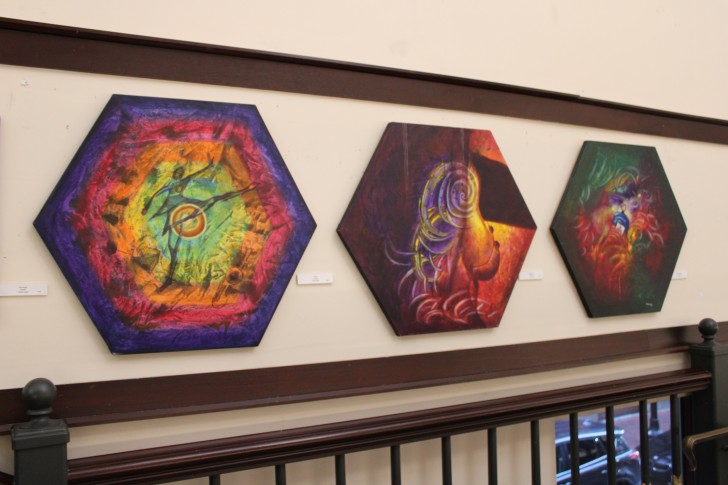 The exciting array of works on display tells Leger’s story and praises his individualistic sense of exploration. While there are recurring shapes and themes, URI’s focus on Nixon Leger presents a collection grounded in lifelong learning, growth, and an unbridled passion for art. . 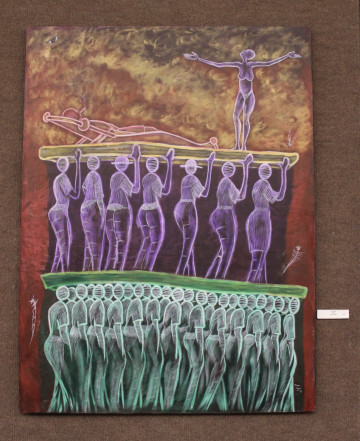 To accompany the exhibition of Leger’s vast body of work, URI will also host “In The Spirit: A Concert of Spirituals” on February 3 at 7 p.m. According to URI, “The concert will feature traditional spirituals performed by renowned music teacher and nationally recognized bass-baritone, Dr. Frank Ward, Jr. artist Rev. Melody Ruffin Ward.

Combining Léger’s luminous and inspiring paintings with this timely concert promises to be an exciting programmatic pairing. The exhibition of Leger’s far-reaching work is a celebration of a University of Rhode Island alumnus of whom the school is justifiably proud. Set against the backdrop of their downtown campus, the show also offers new generations of students inspiration in many forms. Although this exhibition traces more than two decades of passionate artistic creation, it will be exciting to see what comes next for Nixon Leger.

Celebrating Nixon Leger is presented at URI’s Feinstein Providence campus at 80 Fountain Street in Providence through February 24. The show is free and open to the public. Gallery hours are Monday through Thursday 9 a.m. to 9 p.m. and Friday 9 a.m. to 5 p.m. A reception will be held on February 17 from 6 to 8 p.m.