CHICAGO – Morton Salt’s iconic roof, visible to thousands of people every day from Chicago’s Kennedy Freeway, is being removed and repainted.

Construction crews are already dismantling the roof and plan to put the new roof in place before it snows.

Hope you signed up for some extremely local news today across Chicago because boy, oh boy, do I have a big chunk for you guys. This shit is hitting near my home and it’s finally in a positive light that I can say it here. More often than not, it’s just us bitching in the void about shitty leadership and a directionless future. At least this time around we can enjoy something in public, and that is the restoration of Morton Salt’s famous rooftop as they redevelop the property into a hustle and bustle of retail, office and restaurant hustle and bustle. Stay with me guys, I know you don’t care.

This is an important moment, as Morton Salt’s roof is one of the most notable visual elements of the freeway in town. You can get rid of all the road signs, maps, exit signs, and traffic lights and just use places like the Morton Salt Factory as a spatial reference point. For many people, just seeing the label is enough to ignite the emotional triggers at Pavlov’s level that you’re about to ball in 90/94 rush hour traffic. Usually a checkpoint that things are about to get pretty crappy as we approach the Armitage / Damen / Fullerton ramps that dominate and control our Chicago traffic misery. For many people, this is a sign that you are stepping away from the chaos and returning to your peaceful northern life. No one wants to see this place destroyed.

Not even when the place caught fire and lost a wall, dumping tons on tons of refined salt on the nearby streets. Insurance premiums are skyrocketing through the now damaged roof as the public demands privately funded safety assessments. Some said there was no more room in town for coarse salt. That we have to open trade routes to the eastern parts of Iowa and say goodbye to the Morton Salt logo forever.

Well, good news ladies. Big Salt remains with a forward-looking facelift. It’s the kind of modern urban project that Chicago has never shied away from. This is why we won awards as the second most beautiful city in the world. Because we know what people want and we strive to preserve it. It’s called character and charm and Chicago has an abundance of it for everyone.

What is that? Another joke about the violence of the peanut gallery? You really outdid yourself on this one. I would go on tour with this material.

In other news, there is something special about freeway landmarks. Places that generate a bona fide physical reaction when you pass them. Across town, here are a few of my favorites:

-Comiskey: Coming out of that slingshot that separates local traffic from express traffic, you step on the pedal and let that fat kitten purr under your hood. It’s up to 85 mph when you seamlessly switch lanes as the sign begins to rise over the horizon. The 2005 WORLD SERIES CHAMPS banner is proudly displayed. You are anywhere from 10 to 40 minutes outside of the center of town, depending on traffic. It’s the first checkpoint where you know you’re up for some shit.

– Jane Byrne: I don’t even know what the technical exchange with Jane Byrne is. I’m guessing 90/94/290/55 is coming to an end, but they don’t have a designated place where it starts or ends. You just know that the words Jane Byrne translate directly to Clusterfuck.

– McCormick Place: Sailing in the 55-North LSD is a really special feeling. You are flanked by two McCormick locations and step into one of the most beautiful mergers in human history. The soldier is on your right. Grant Park on your left. Museums are everywhere. Lakeside action with sailboats and picnics. You feel all of these emotions at the same time the second you divide the McCormick places. Great vibrations.

– Novak Construction: General contractor hitting the north side with exceptional Christmas decorations. A building with a unique look. Bold signage. This is one of the best private placements I can think of. So many people who don’t know about construction know about Novak Square. It is the brand image. It’s marketing. You see a Novak offer coming in and you know it means business. Meanwhile, the guys from Walsh are busy in their own gated community in the West Loop. Private, yes. But not the local touch and flavor you get as you walk past Novak. Right after that, a Metra notice board will remind you that your commute is fast.

– Place of the Concorde: Nothing says welcome to the Wisconsin Dells like 22 stories of 1960s mixed-brick architecture. I’m sure grandma hates this place, but I really like Northlake. One of Chicago’s most underrated villages.

– Shaws Crab House digital clock: I can’t be the only one who appreciates the fact that Shaw has a big ass fucking digital clock on the other side of the Ohio ramp westbound. I can’t be. (I know it’s changing but it’s still Shaws to me.) 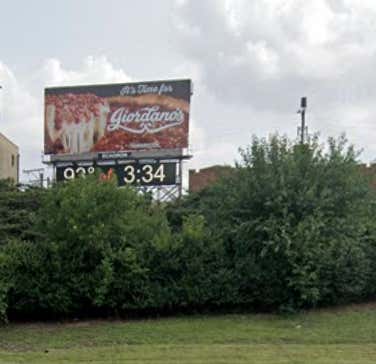 – The 90 Sirens: It might just be me, but there’s a Hooters on O’Hare’s path that makes me hot and blurry. The same could be said for the Wilson Sports skyscraper in Rosemont, but ultimately I say the Hooters. You are about to be raked over the embers with confusing ramps. 190 here. 290 there. 90 is at 294 at ORD departures. Whoever drew this place is an agent of chaos and when I see these Hooters I know I’m going to fight. Don’t even try to let your GPS catch up with you. You’ve already missed the ramp.

– Bo Jackson Dome on 355: I’m going to go south of you guys and give you an underrated place and that’s the Bo Jackson complex in Lockport. You pull out 100 at the exit of a TOLL ROD BLAGOJEVICH and you can’t help but be speechless at the size and mass of this installation. 18 football fields or shit. Another half a dozen baseball fields and training facilities and major league baseball players training and all that crazy shit. Athletes of all shapes, sizes and ages and sportspeople flock to this place. You see it and you know that Lemont is right behind. Then Bolingbrook and Naperville and Downers to Schamburg and Arlington Heights. For me, the Bo Dome is the last line of defense. You get to the south of that and now we are in Joliet. This is another blog.

They are my big boys. I miss a ton of shit. Sound off in the comments below.