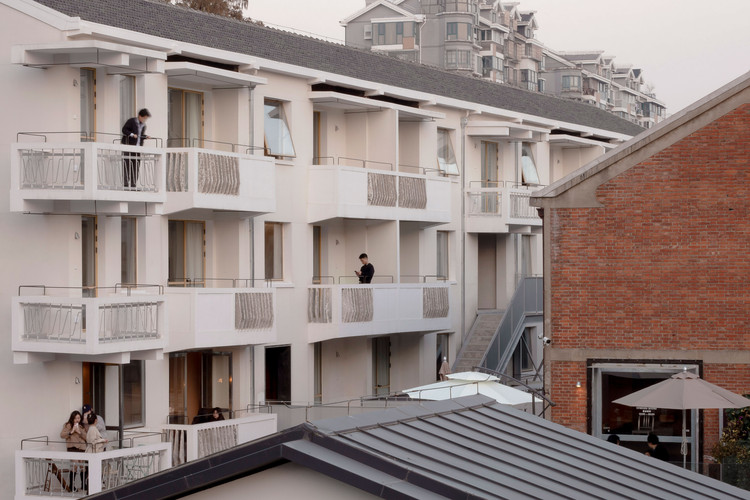 Presentation of the site
The historic Xiaoxihu district, which connected Fuzi Miao (the Confusing Temple) and Laomendong (East Gate of Zhonghua) is located in the central area of ​​the old town of Nanjing. Its boundary is also established by historical markers: south of Changle Road; north of Madao Street; west of Gutong Lane; and east of the Inner Qinhuai River. Xiaoxihu Historic District has been listed as a Historic Preservation Area in Nanjing Municipal Preservation Planning. Most of its traditional architectural layout has remained intact. With its winding streets and alleys, its spatial pattern facilitates the improvised yet dynamic urban texture and ultimately created the complex residential form with intricate adjacencies.

Existing architectural state
After a thorough site survey, the structure of the host buildings revealed their varied properties and also presented challenges: two buildings were one-story wooden structures with sloping tiled roofs. The other two multi-storey towers were of a brick-concrete structure, in which the majority of the brick walls served as the main load-bearing element, and the floor consisted of a precast concrete slab.

The structural analysis composed several problems to be solved:
1. The brick-concrete structure, especially the mortar in between, was extremely aged and therefore unstable.
2. Brick walls on the second through fourth floors left hollow brick insulation, which was against existing architectural code.
3. As the host buildings were built decades ago, fundamental structural elements like building columns and beam rings were missing.
4. The existing precast concrete slab is not sufficient for the structural requirements.

Structural reinforcement
To remedy the insufficient existing structural strength, we proposed to reapply steel mesh with high strength polymer mortar to the entire brick walls and insert building columns. The regular carbon fiber reinforcement layer was applied to the precast concrete slab to increase its flexural strength property. In addition, steel angels have been used to deal with curtain slabs which have an insufficient length span.

Commercial zoning
Following the request of commercial partners, we are reorganizing the circulation of visits through the four buildings: A glazed room has been inserted between the original single-storey buildings to form an interior atrium. The two multi-storey buildings are connected by a series of newly added steel corridors and form a unique longitudinal visitor experience. The ground floor of the four buildings has merged into a single commercial area with various businesses and vendors: Chinese restaurants, noodle shops, cafes, bakeries, western restaurants and bistros.

The second to fourth floor serves as a hotel with 44 rooms. The design of the guest room follows the characteristics of the original residential building. Semi-outdoor corridors bring the vibrant local ambiance of Nanjing Old Town into the modern commercial space. In addition, each floor has been designated into different types of rooms by different doors.

Spatial strategy
Sequence is a very important aspect of experience curating. “The scene changes as the footsteps move” was once the guideline of traditional Chinese gardening, which reflects its delicate arrangement of multiple spaces with multiple viewpoints and thus artistically creates the changing experience, as in the long scrolls of Chinese painting.

As we renovate the reception buildings, several consecutive bays form a continuous visitor experience with an interlocking space like “a door within the door, and a stage within the stage”. the “static” scenes are consistent in a complete sequence like the “movement” of the tour. The original spatial model of an open space was divided into sequences and formed a new interior atrium, which leads people to the place of landscape and light without noticing it through openings and doors.

Summary
Five years have passed since our initial study on the conservation and revitalization of Xiaoxihu District, and now the renovation will take shape. Winding streets with traditional residences in Jiangnan (South Yangtze) now mingle with communal museums, art studios and 24-hour bookstores. While the preservation and regeneration of Xiaoxihu District will never stop.