A cultural forum on Swiss architecture and art kicked off on Saturday in Aranya, a hip community space focused on arts tourism in Qinhuangdao, north China’s Hebei Province, as the first chapter of the month of Swiss space architecture which will run until mid-August.

Organized in collaboration by the Swiss Embassy in China and Juanzong Books, the forum invited four ingenious Chinese architects – able to play with their Eastern cultural tastes through Western approaches – to share their projects which reflect on the theme of ” sustainability “, a central issue in architecture.

Adopting rather abstract themes such as “sentient mountains” and “passive architecture,” the forum discussion focused on how buildings are designed to fit the mountainous geography commonly seen in China and Switzerland.

Three Chinese architects Liu Kenan, Zhuang Ziyu, and Yu Dao engaged audiences by deductively showing the thought processes behind their projects to enable them to understand how they balanced idealistic vision and well-calculated functionality in their designs.

All three designers said they associate sustainability with a concept called “passive architecture,” which is related to a designer’s desire to use natural energy sources provided internally by a building (by design) rather than relying on it. energy from outside. .

“This is not a good concept. In my opinion, such an attempt is aimed at making a building self-sufficient. For example, designing a natural ventilation system for a house based on local air circulation,” Dylan said. Yang, architect, Global Times on Sunday. 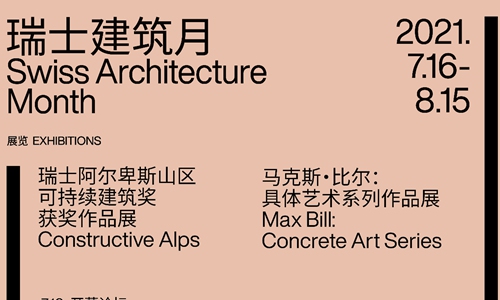 promotional material for Swiss Architecture Month in Qinhuangdao Photo: courtesy of the Embassy of Switzerland in China

Alongside the forum, the space is also organizing an art exhibition focusing on Switzerland’s most iconic modern artist, Max Bill. The exhibition features the artist’s rare prints to bring audiences closer to the Bauhaus art movement – a postwar modern design philosophy that praises “simplicity” and “rationality” in art that continues to influence designers today.

“I became a fan of Max Bill while I was studying art in Paris. I also love his character from Helvetica, but I never saw his real works there. I’m so happy to see his works up close this time, “audience member Zhu said. at the conference, the Global Times said on Sunday.

Besides “architecture” and “art”, an exhibition of Swiss architecture books was also launched on the same day. Also part of the month-long event, an online conference to discuss China-Switzerland relations is scheduled for July 30.