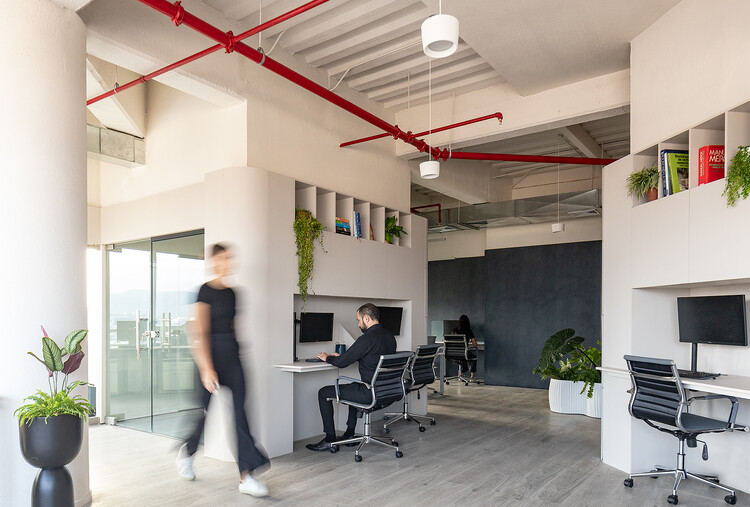 Text description provided by the architects. An approach influenced by personal connectivity, spatial efficiency and light is proposed; where intimacy, density, visibility and connection are intertwined in a space with material honesty. The mission involved the development of a new work environment for a financial institution located in Guayaquil, Ecuador. The commission was born from the need to spatially solve the interiors (297 m2) with emphasis on its production area. The space was specified to include meeting areas for staff members, a coffee station, a cafeteria, the main office, service areas and an operational area, which is a production space of 120 m2.

The main spatial strategy aimed to free up the perimeters of intervention to democratize access to light. This has enabled the creation of an open space format that promotes productivity and integration of staff and team members; which is bordered by three production cores (main offices) organized by furniture serving as workstations. The three production nuclei were established as corrective axes of the place, resulting in the subdivision of two operating spaces of 9 and 22 people each. The location of each module, as well as its shape by the mass (storage and workstations) and the void (access) allow better control over the work area of ​​31 people.

A panel system has been developed, consisting of 4 types of laminated panels from the Pelikano brand, for the construction of modules and furniture, as well as for general partitions. Thanks to this system, spatial limits have been proposed in the form of productive modules composed of three main elements: storage modules that work in two directions; both for the headquarters and for the operational area, operational workstation modules towards the common area and glass partitions. Ceiling light fixtures were exposed and drywall was used.