Scenes from the composition Smoking Kills.

In his first exhibition, Nassar reflects the spirit of a mutineer or a revolutionary. He rebels against dominant metaphors, established symbols and the power of authority.

The exhibition consists of four series of works of art that focus on the theme of breaking metaphors and resisting rules, expectations or norms and questioning representations of the establishment and the authority.

Nassar works in a range of materials and styles and uses a mix of abstract paintings, collages, drawings and photographs in addition to ready-made objects.

He ridicules and exposes what lies below and beyond the surface, encourages acceptance of other opinions, beliefs and behavior different from his own, and rejects the dominance of power and authority.

In one series, he places five packs of cigarettes in the middle of five different archival images of wars that have taken place in five different countries around the world.

The message on the five packs reads: Smoking Kills, in the five languages â€‹â€‹related to the different geographic areas where the photos were taken.

The series focuses on two levels of dangerous threats to humanity: war and smoking. Nevertheless, the third layer that it tries to convey reads between the lines: it is the deadly combination between capitalism and politics, where the politics of war paves the way for Western multinational conglomerates, to dominate the economies of the poorest countries. , by selling products that also kill.

In Network, Nassar’s works take the form of abstract art, through colorful geometric bands that occupy the canvas. In the middle of each work, he adds a real sample of blood slide. 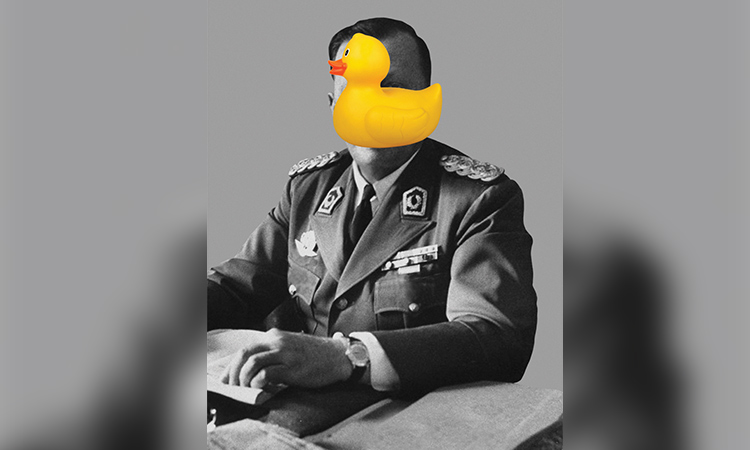 The ridiculousness of unbridled power is a hallmark of Saher Nassar’s work.

The stripes are meant to reflect the variety of data in the blood samples, representing “his behavior, likes and dislikes, and what makes them what they are.”

So while a drop of blood can metaphorically unite a group of people, the details tell a different story. In this sense, the artist launches his appeal against tribal partisanship and ethnocentrism. He looks at how individuals are and not what they appear to be.

In Kill The Metaphor, he presents a series of mixed media works, exploring â€œthe myth of power and the power of mythâ€, in different ways.

Nassar says his works are meant to undermine the status quo and highlight the exercise of power and authority imposed on individuals and society in general, and they are meant to discuss control and domination and attempts to resist them.

He explains the metaphor as â€œa tool to help us understand phenomena and make sense of the world around us; however, this could be misleading and could prevent us from seeing the truth.

Nassar’s carefully chosen words and images attempt to exhibit objects or actions that reinforce the authority of power over people and encourage narrow-mindedness, while making them think otherwise.

â€œTwo things are the keys to my job,â€ says Nassar. â€œKnowledge and in-depth observation, which I believe are best practices for encountering and solving visual problems.

â€œI developed as an illustrator and fine artist alongside my professional development in design and visual branding, and my goal has always been to accompany the structural elements of design with the right aesthetics, looking for big ideas. “Metaphor” is organized as part of a series of exhibitions on Alserkal Avenue with the aim of encouraging young Palestinian artists to create and become participants, and provide them with a platform to exhibit their works in front of a wider international audience. This is part of the gallery’s attempts to empower and support young emerging artists.

Nassar was born in Palestine in 1986. After graduating from the University of Hertfordshire, England, he began a career in illustration and graphic design, working with various renowned media institutions.

It didn’t take long before he discovered himself as an artist and embarked on his art journey. He uses different methods and materials and his artistic approach oscillates between conceptual, abstract and pop art.

He has participated in several group exhibitions and has been commissioned by Alserkal Avenue and Manarat Al Saadiyat (MAS), Abu Dhabi, among other institutions of the United Arab Emirates.

His current practice is focused on contemporary art, and his works tend to discuss a variety of topics and present social criticism that correlates with an individual’s conformity and the status quo.

He was born in Gaza and lives and works in Dubai. He graduated from the College of Applied Art, Palestine. At the University of Hertfordshire, he studied illustration. Social observation and self-interpretation are key roles in her creative practice, which intersects with skills in art and design.

Zawyeh Gallery is an independent visual art gallery founded in Ramallah, Palestine, in 2013. Since 2020, the gallery has grown by opening in a second location in Dubai.

The gallery’s mission is to promote emerging and established Palestinian artists – from Palestine and the Diaspora – through various thematic exhibitions at home and abroad.

In recent years, he has organized several solo and group exhibitions, showcasing works of art based on a variety of mediums including painting, sculpture, installation, video and photography.

Zawyeh believes in investing in creativity and artistic talent in Palestine, as a means of resilience in the face of adversities.