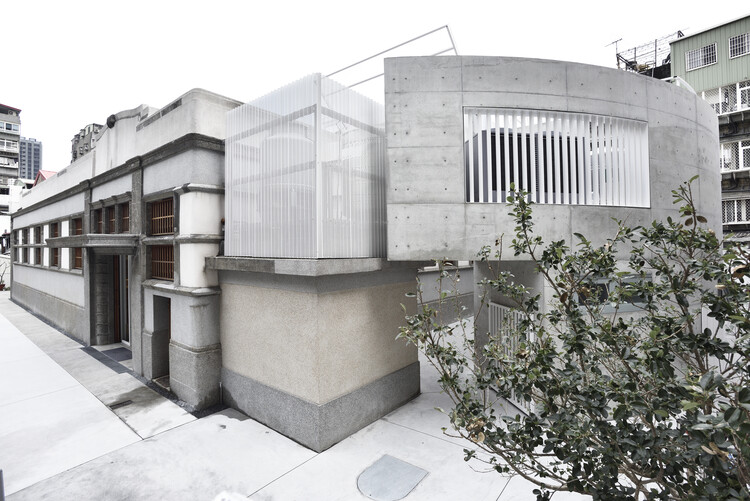 Text description provided by the architects. Regarding the preservation of the historic Hsin Fu Market, the project aims to achieve an understanding of its existence through the design of the building and its physical condition. Hsin Fu Market built in 1935 in Wanhua District, Taipei’s oldest district, was designed based on “Form Follows Function”. The horseshoe plan offers a loggia space such as one finds in the typology of public squares where traditional markets were once located. Due to its original design, the HsinFu market clearly stands out from the traditional market, which is generally more permeable.

Hygiene was a key point in the design of the space section. The 3 meter high atrium void and stacked windows provide the light and ventilation required for the market. The interior layout consists of two slightly raised stalls and a comfortable walking area. Inside the market there were more than 30 stalls, the vendors and customers were Taiwanese and Japanese, and so the products and market life were a well-mixed representation of the society at the time.

The new design calls for the ephemeral, reflecting the temporal timeline (10-year lease term) and the inconsistent usage situation (co-sharing office space). It must also respond to the mix of public and private spaces, as well as the problem of installing new building equipment without destroying or modifying the state of the existing building.

The design is divided into 2 parts: the co-shared office space within the original building and the new public toilets. In terms of mass, the new design has retained the U-shape of the original design and generates an open volume between the old and new mass. This covered and semi-outdoor walkway will serve as a contrasting mediation space between the two masses. It is interesting to note that the use of the new mass as a public toilet will last longer than the program of welcoming offices in the old one which will only be temporary. Therefore, cast-in-place concrete is chosen as the main material, mimicking the color of the old building’s granolithic exterior.

The program of the old building includes a shared office, an Aula kitchen conference room, an exhibition space, a meeting room and a cafe. Due to the ephemeral nature of the intervention, we chose larch plywood, generally used as a light support, to build a 1.2 meter thick wall that houses all the necessary mechanical equipment, storage, circulation vertical and projection equipment.

The thick wall is covered with a translucent polycarbonate plate glued directly to the wooden frame like the vendors on the outdoor market. Translucency defines a public and private partition; provides thickness that is both transparent and contextual. According to usage, this thickness is both partition and space. It emphasizes the presence of the atrium, transforming what was once the void of the building into a solid. Meanwhile, this thick wall also becomes a circular exhibition hallway, mediating between old and new in an effort to provoke curiosity. This dialogue provides a platform to re-understand the significance and duty of this historic building in the present day.